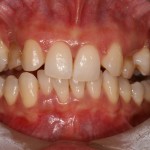 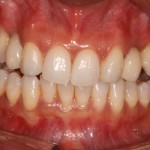 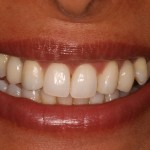 Mrs P has been seeing Dr Ketan Shah at Brighside Dental for around 2 years. Her children have been attending the practice since they were very young. Mrs P was unhappy with the appearance of her smile, especially the upper front teeth. She had 2 canine baby teeth present which were now wearing down and starting to cause some pain. There were a number of challenges we discussed – the main ones being that the permanent canines were in the place where the lateral incisors should have been, but were not present and the first premolar on the left side was very far out of line.

After discussing various options including fixed orthodontic treatment, Mrs P wanted some time to decide on the best option. This took a few months mainly due to her being worried about going through the treatment and whether she would get a good result. The other fear was never having had any dental treatment before, as she had never had a filling.

Mrs P decided on have Invisalign teeth straightening. She did not want to have a visible brace, so the clear aligners suited her very well. We were both fully aware that we would not be able to achieve an ideal cosmetic result but she was happy with this.

The treatment carried out was Invisalign teeth straightening for the upper and lower teeth. Following on from this, the upper baby canine teeth were extracted and a temporary denture was made so that there was no time with gaps showing in the mouth. While the gums were healing a course of teeth whitening was carried out to improve the colour of the teeth.

The final part of the treatment was bonding to the upper canines to mask their prominence as they are in the wrong position and adhesive bridges were placed to replace the missing baby teeth. These have the benefit of being more comfortable than a denture and the teeth were not prepared or damaged, so Mrs P has the option of having dental implants placed in the future.

The treatment was completed in 1 year. Mrs P was very pleased with the results achieved and her only regret was not having had it done sooner.