The answer to this has to be no. However, sports drinks can be bad for your teeth. 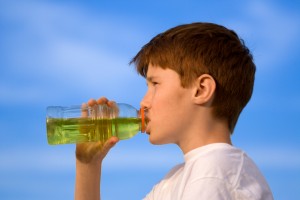 With a summer of sport including Euro 2016 and the Olympics, it is a time where athletes are most likely to suffer dental problems.

Honing their bodies through intense physical effort, athletes refuel with energy drinks, gels and bars and frequent meals, which teeth don’t like. Dehydration from sweating can also cut the production of saliva needed to regenerate tooth enamel.

Some rowers, for example, have “huge amounts of decay” because they’re training in boats for hours at a time, refuelling with teeth-eroding acidic, sugary drinks, said Tony Clough, who set up the dental clinic for Olympians at the 2012 London Games. Located in the athletes’ village, it had 30 dentists and 1,900 visits. “We had patients coming in at 10:30 at night to have root canals and things like that,” said Clough.

A study that looked at 278 of the clinic’s visitors found 55 per cent had cavities and three quarters diseased gums, mostly gingivitis but also 15 per cent with more serious periodontitis. One-quarter said dental problems affected their quality of life.

However, this problem doesn’t only affect those involved in sports. Children are increasing consuming high-sugar sports drinks unnecessarily. A recent study found that 89% of school children consume sports drinks with 68% drinking them one to seven times per week, half of which purely for social reasons.

These drinks increase the risk of dental cavities, enamel erosion and obesity. If you’re a parent, it can be very difficult to know what you children are eating or drinking when not at home. It’s a difficult situation to improve as children look up to their favourite sporting stars and also are influenced by their peers.

If you could like some further advice, give our team a call.