When we are happy we smile and when we are sad we frown. If you think about it the other way, could smiling make us feel good? 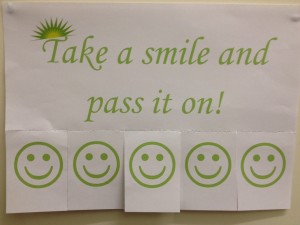 There have been studies carried out throughout the years by many scientists who have deeply researched the connection between facial expressions and emotions. One of the first to publish this idea was Charles Darwin in 1972 who said that merely by expressing the emotion you feel could make it more intense. William James was one of the well known psychologists of the 19th century who was convinced that a person who doesn’t show any emotions has no feelings as all. It’s obvious that nowadays this can be disputed but we cannot deny the connection between body language, especially facial expressions and what we feel.

One of the studies carried out by psychologists at the University of Cardiff concluded that because of the limited ability to frown on people who have had botox injections, these people are on average happier than the ones without undergoing any facial fillers treatments.

So do you think that smiling more could improve our mood? We should give it a try and see what works for us because at the end of the day we are all different and unique.

There are various reasons for showing a happy face but let’s go through the most important ones. Apart from the fact that, as you can see above, it could make you feel better, it makes the ones you interact with feel better too. And the entire communication process turns out to be improved.

It’s also known as a good de-stress method. Apparently if you smile when in a stressful situation the level of anxiety drops and your breathing slows down which will make you more relaxed. Why not give that a try next time your boss is on your case.

Studies have shown that one of the main features people assess in a prospective partner is the teeth.

Smiling also makes us look more attractive, so do not stop showing your pearly whites as you might miss out on something really good!

It releases endorphins, natural pain killers and serotonin in the brain. In a study on the effects of smiling on the overall mood of the subjects the people who were told to smile during a certain procedure have recorded a lower level of pain than the ones who were told to frown.

Smiling changes our mood and can be contagious, it lifts up the face and makes us look younger, it triggers changes in our body that we have never thought about and it’s so easy to do by just effortlessly flexing our facial muscles.

Giving all of the benefits that a simple smile can give us, why is there we don’t do it more often? What’s stopping us? Maybe the fact the we don’t think about it that much so next time you are in a situation that needs a bit of a lift try and pull out a big fat smile for everyone to see.