I took to the streets of London along with over 4000 other cyclists and participated in the Nightrider 100km bike ride for the second year on last week. 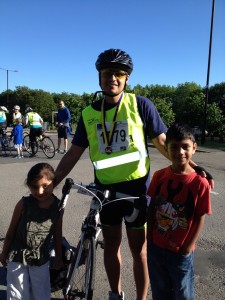 Ketan with his children at the end of the ride

I decided to take up the challenge primarily to be able to support and raise funds for a an important charity and also to push myself physically and improve on my health and fitness.  My training started from a few months prior to the event and often involved 5.00am bike rides with my brother in law.

The ride went well, with a 12.30am start time, my main concern was a lack of sleep, however the adrenaline kicked in and with so many other cyclists around, this wasn’t an issue.  It was great cycling through London at night.  I’ve always lived in London and often take it for granted, having so many wonderful sights in the city.  The traffic was very heavy in central London even at 2.00am and from what was initially a worry about cars around me, I ended up being more wary of pedestrians, many of whom had had a bit too much to drink and were staggering into the roads.

I completed the ride in just over 7 hours including breaks, which was my target time and it was great to have my family at the finish to spur me up the final hill to Alexandra Palace.

I decided to support Bowel and Cancer research as both of these areas have had a direct impact on him.  I  was diagnosed with Ulcerative Colitis a number of years ago and live with the condition on a daily basis.  I also has family members who have suffered from inflammatory bowel disease and also bowel cancer.  These conditions are becoming a lot more common, however many people still do not know much about them.

The purpose of the charity Bowel and Cancer Research is to save lives and improve the quality of life of individuals with bowel cancer or other bowel diseases. Bowel cancer is the 3rd most common cancer in both men and women. In 2010 16,013 people died from bowel cancer, someone every half an hour. 100,000 individuals are living with Ulcerative Colitis and 52,000 with Crohn’s Disease (Inflammatory Bowel Disease). Despite these staggering figures, bowel disease as an area of health has one of the lowest ratios of investment in research compared with the burden of disease. As a result life-long diseases such as Colitis and Crohn’s are still very poorly understood, the best that a patient can expect is the management of their symptoms – any cure is a very long way off.

I am hoping to reach my target of raising £1000 to help this charity in the fantastic work they do.